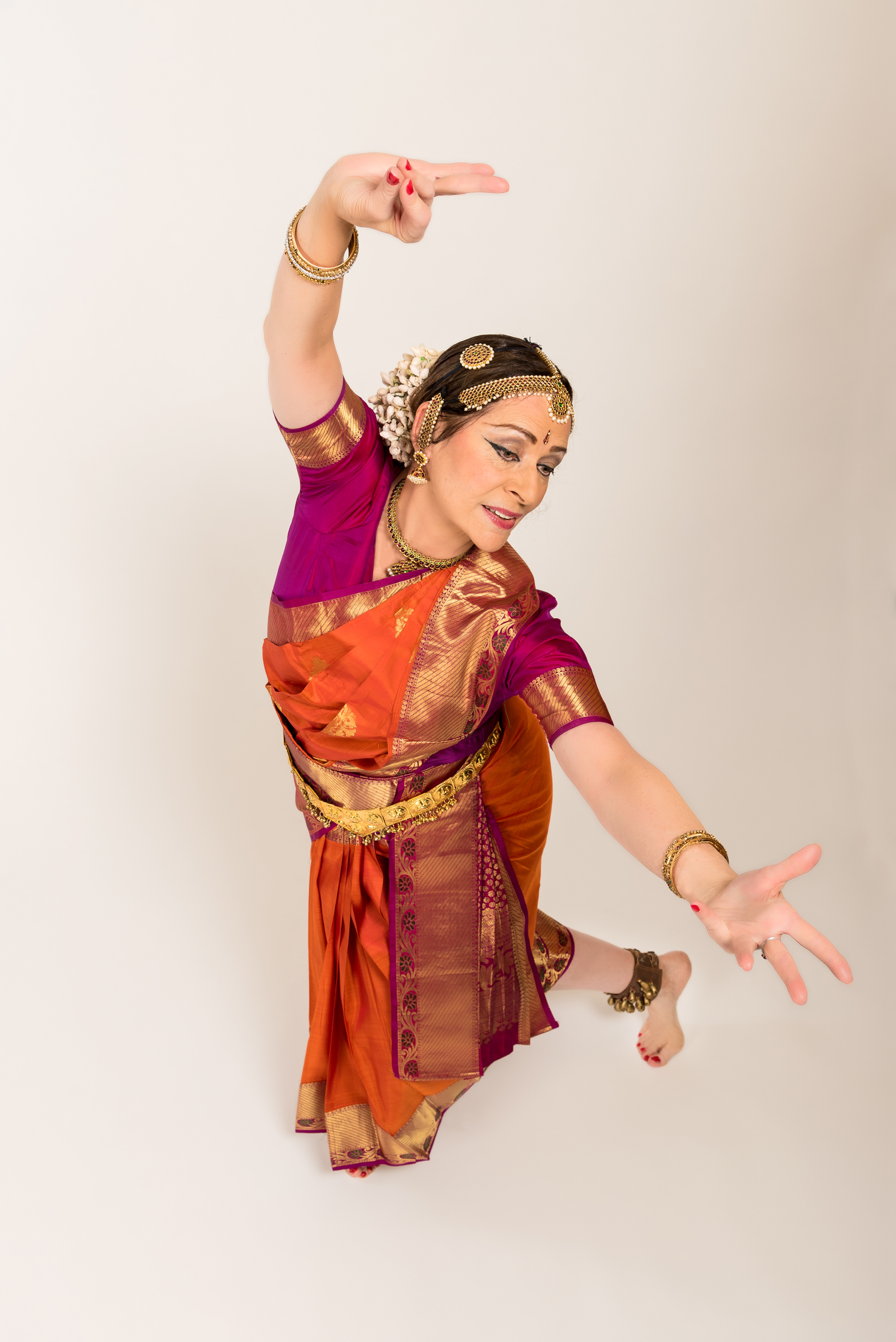 Bharata Natyam is one of the four main classical styles in India. It developed from ritualistic dances performed in the past as offerings to the deities of Hindu temples and in a more sophisticated form in the courts by solo female dancers.

The traditionally conservative South maintained a style closely related to the type of dancing mirrored in temple sculpture during more than two thousand years of recorded movement in the stone. The great wonder of Indian dance is that it can be both an act of religious devotion and a superb entertainment at the same time. In a successful performance, philosophy and human emotion blend in a subtle combination, which gives a special flavor to every sound and movement The aural aspect of a concert is as important as the visual.

The two main categories of dance, nritta, or abstract dance for the sake of its own beauty, and nritya, an expression of a mood or story through pantomime and a rich language of gesture, are equally well represented in this style. The solo dancer presents a concert-types of dance-related to specific musical forms-and she proceeds from items of abstract dance (nritta) through others which introduce portions of drama (nritya), to the culminating padas and javalis in which full attention is given to the interpretation of a poetic text through gesture and bodily expression. The word abhinaya may be loosely translated as drama, but it is a very particular style of drama. For the most complete aesthetic experience, a performance usually requires an audience to understand the poetry.

The ideal audience is comprised of rasikas or Sahrdayas (people of pure mind, with no mental prejudices or inhibitions). Rasa is aesthetic rapture or relishes on the part of the observer, which is derived from a work of art For an erudite and fascinating exploration of rasa theory, see Priyadarshi Patnaik’s Rasa in Aesthetics: An Application of Rasa Theory to Modern Western Literature, D.K Printworld Ltd., New Delhi, 1997. Rasa arises from a combination of Bhavas, emotional states -Sthayihbhava, the dominant stable state, and Sancharibhava the transitory fleeting state. The causes are called Vibhavas and the consequences are known as Anubhavas. Rasa, in order to exist entirely, depends on the viewer or perceiver. Most western audiences benefit greatly from text translations for all dances in a concert.

1. Alarippu, the opening dance of invocation, is ordinarily danced to a purely rhythmic accompaniment played on a drum capable of great variety of tonal color, the mrdangam. The chiming of small brass hand cymbals played by the nattunavar or dance master represents certain patterns of recited vocal syllables, which are used in teaching the various movements of choreography. The recited syllables, in turn, represent the sounds of the drum. The dance master recites some of the syllable patterns aloud when a certain type of dance sequence known as tirmanam is performed in subsequent concert pieces. A Bharata Natyam dancer usually knows alarippus in three, four, five and seven beats respectively. 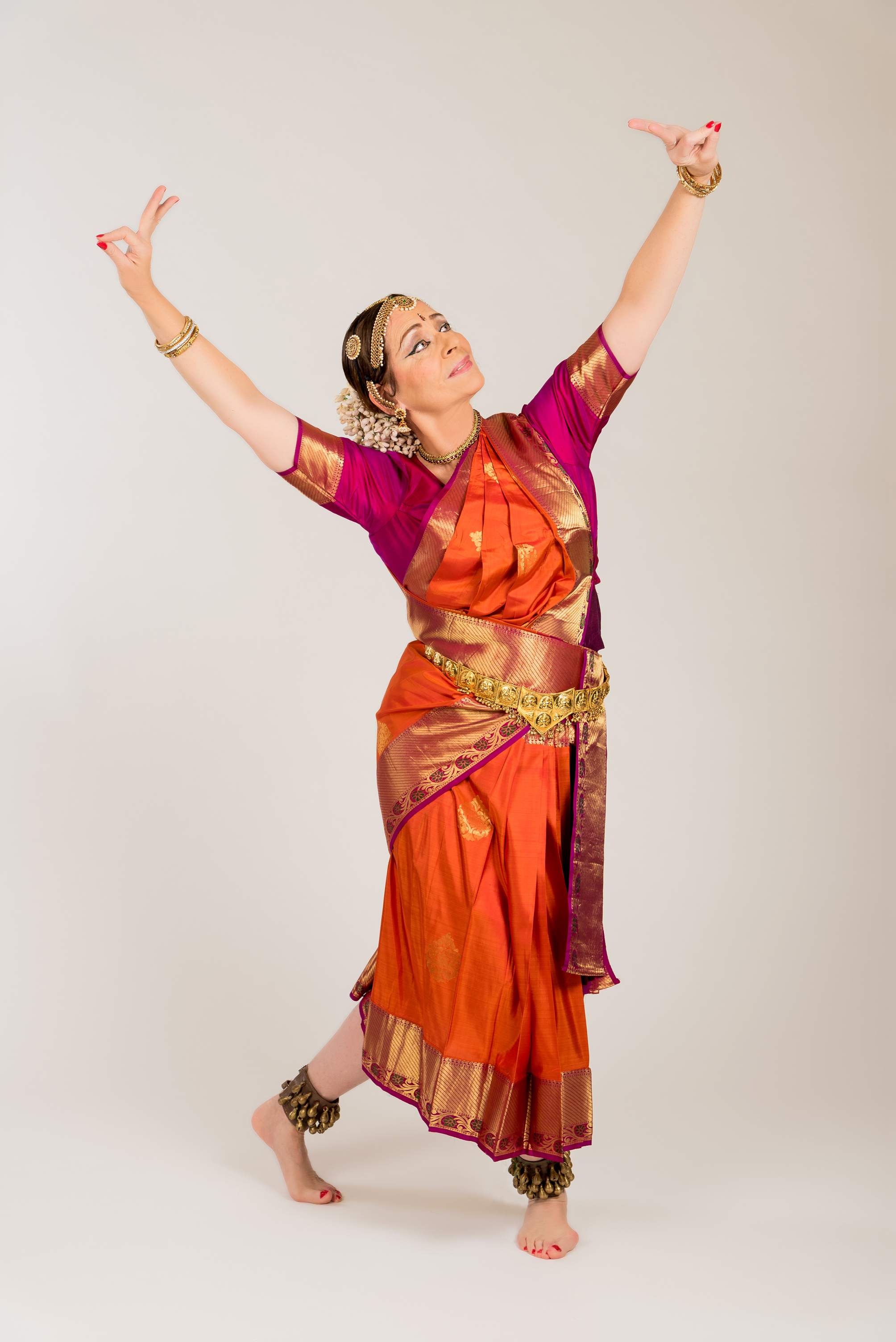 2. Jatisvaram, is a musical form similar to the rondo, in which a refrain (heard first at the very beginning) alternates with three or four sections of contrasting melody. There are no words, but the melodies employ the Indian sol-fa syllables (sa, ri, ga, ma, pa, da, ni) for the seven scale degrees. These are known as swaras. Jatis are rhythmic patterns or compositions and comprise an arrangement of solfeggios in rhythmic patterns. Indian melody conforms to certain modal types known as ragas. Each raga has a particular scale, certain ornaments associated with its tones, traditional melodic phrases, various musical aesthetics, and emotional connotations, which help to give it a unique character and mood of its own called raga bhava. T. Balasaraswati, recognized as a great dancer and eminent musician said,
“You cannot teach raga bhava … this innate understanding of the mood of the raga you must be born with … and without it, a dancer is limited in her ability to interpret the poetry for this dance” A dancer usually knows at least five jatisvarams. 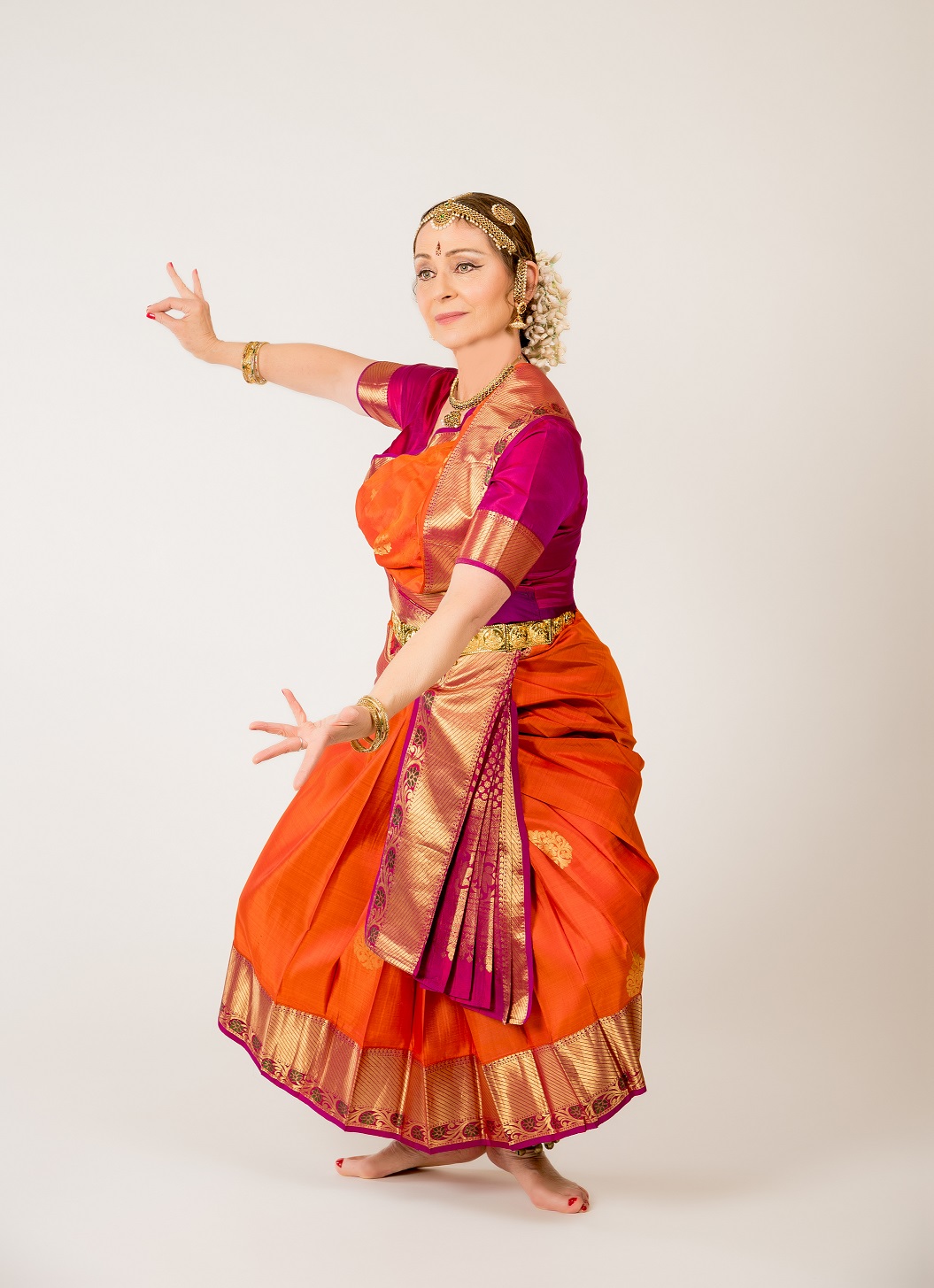 3. Shabdam, is often sung in a medley of ragas, known as ragamalika. The form is simple consisting of four or five sections of poetry in different ragas, set in seven beats (misra chapu) separated by short passages of drum syllables chanted in the raga scale. This is the only instance where the syllables are sung rather than spoken. The text usually praises a king or a specific deity. The challenge here is for the dancer to keep a steady flow of gestures and mime to this densely compact text in seven beats. Short sequences of abstract dance are done to the syllables, which separate the various poetic sections. A Bharata Natyam dancer usually knows at least three shabdams. 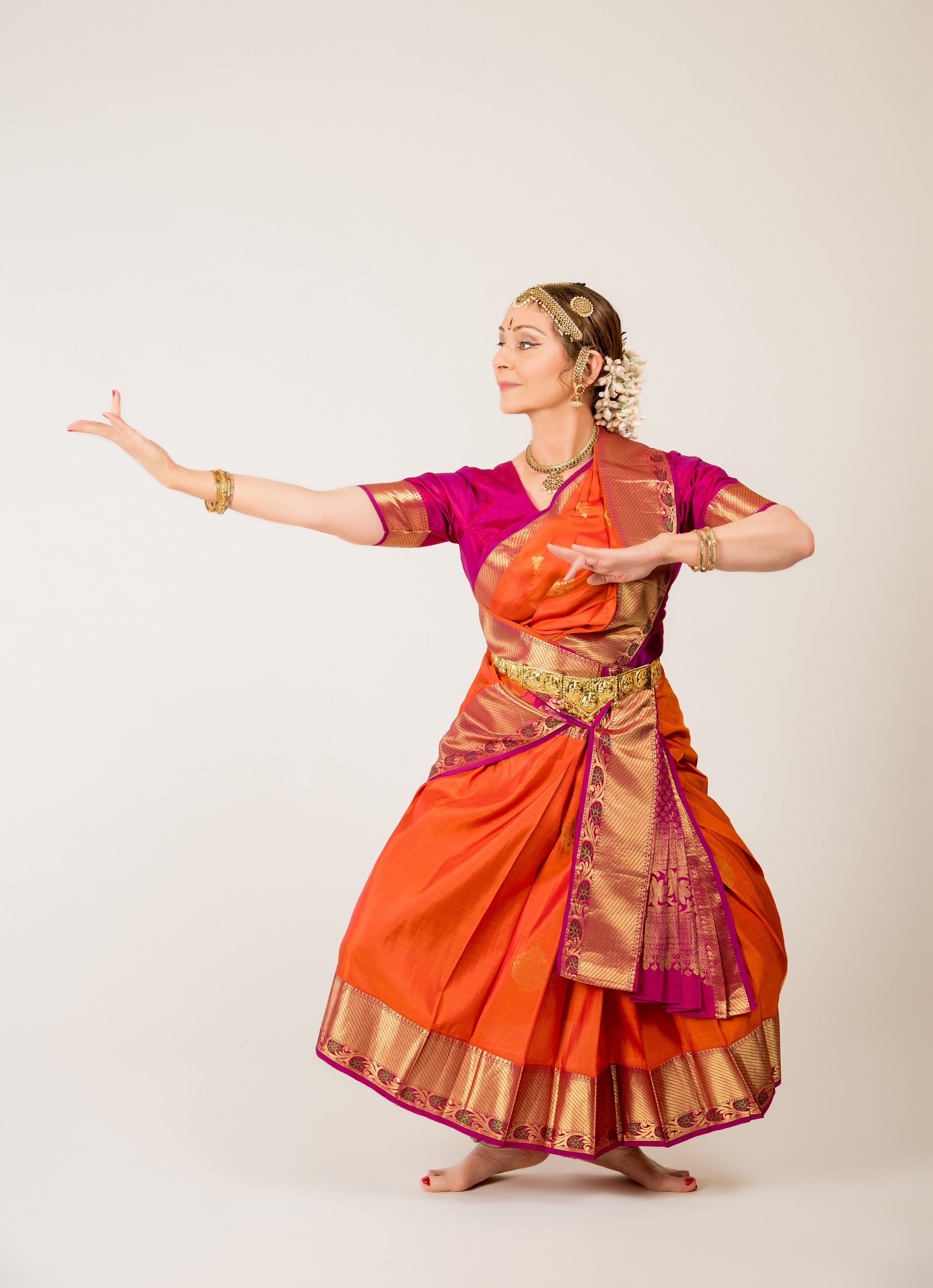 4. Varnam”AS early as the 6th century AD the Tamils were describing their holy language, centamil, as threefold, muttami􀀵 encompassing word, music, and danced mime, and which can generate the presence of the god and his/her power (shakti). The female temple dancers, devadasis, have been accomplishing this communication with the gods for the king and his people for two millennia. It is ’embodied knowledge’ that can only be transferred by the female dancer to the public as a sensual experience. Central in all this is the varnam, a literary form expressing love for, and eventually unification with, the god. The varnam text consists of three parts, but it is introduced and developed by the dancer using several mime figures in an improvisation. In the end, the public is immersed in this experience of love for the god. They experience harmony with the essence of being and well-being bliss.” – Dirk Nijland.

This is one of the reasons my teacher, Balasaraswati, thought men should not perform most of the dances in the classical dance repertoire. She asked that I explain to men who might be interested in studying this art that there were many barriers to their performing this living dance tradition. ‘They can learn the abstract dance portions,(i.e. alarippu, jatisvaram, ti Ilana) but they should not perform the drama to the [bhakti] poetry … this is inappropriate … almost a sacrilege’

I have always wondered about the growing number of men who perform Bharata Natyam not only in India but worldwide. In context with Balasaraswati’s and Dirk Nijland’s statements, I whole heartedly agree with this sentiment -Kay Poursine. 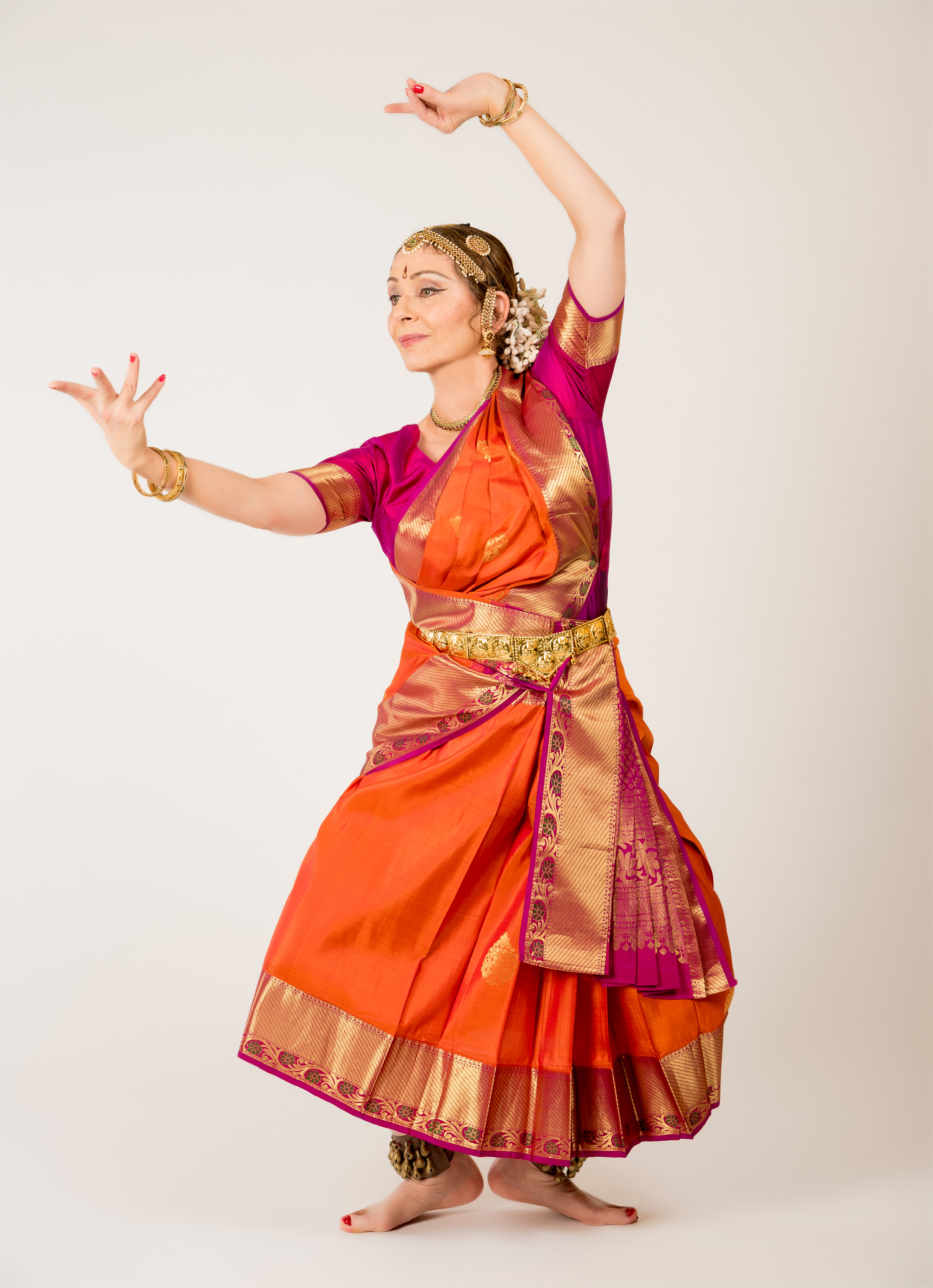 Varnam, is a complex music form, and the basis for an even more complex dance. The main item on the program, it may sometimes be performed from a half-hour to an hour depending on the expertise of the dancer. It combines abstract dance and abhinaya (drama). One line of the music, for instance, may be used for a brilliant rhythmic tirmanam as well as for improvisation of the text in drama. The musical and poetic form is in two main, sections. The first consists of Pallavi and Anupallavi, each having two lines of text, and Muktayi (composed) swaras. The latter melody is sung first in swara syllables and then with words. The dancer interprets the syllables as abstract dance movement, and the words in drama. Sometimes the two are combined-the dancer moves about with difficult footwork called tattimettu as she does the gestures. In Pallavi and Anupallavi words are also interpreted in abhinaya, and one line may be danced for some time. Each line generally concentrates on one of the nine rasas, or emotional states: love, bravery, compassion, wonder, humor, fear, disgust, anger and serenity. When the dancer finishes abhinaya for a particular line, she usually concludes with a tirmanam in abstract dance. The second half of the varnam begins with a refrain melody known as the caranam. This alternates with four or five sections of swaras, in the same type of rondo form found in the jatisvaram. However, in the varnam, each set of swaras also has words, and is immediately repeated with text The swara passages are done in abstract dance, and the sections with the text in drama. As in many Indian dances, there are moments of repose in the varnam where the dancer steps out of character briefly, before beginning the next portion. This provides an excellent aesthetic device to give both audience and dancer a rest as it were before they experience the intense emotion in the last half of the dance. An experienced Bharata Natyam dancer usually knows at least seven varnams. 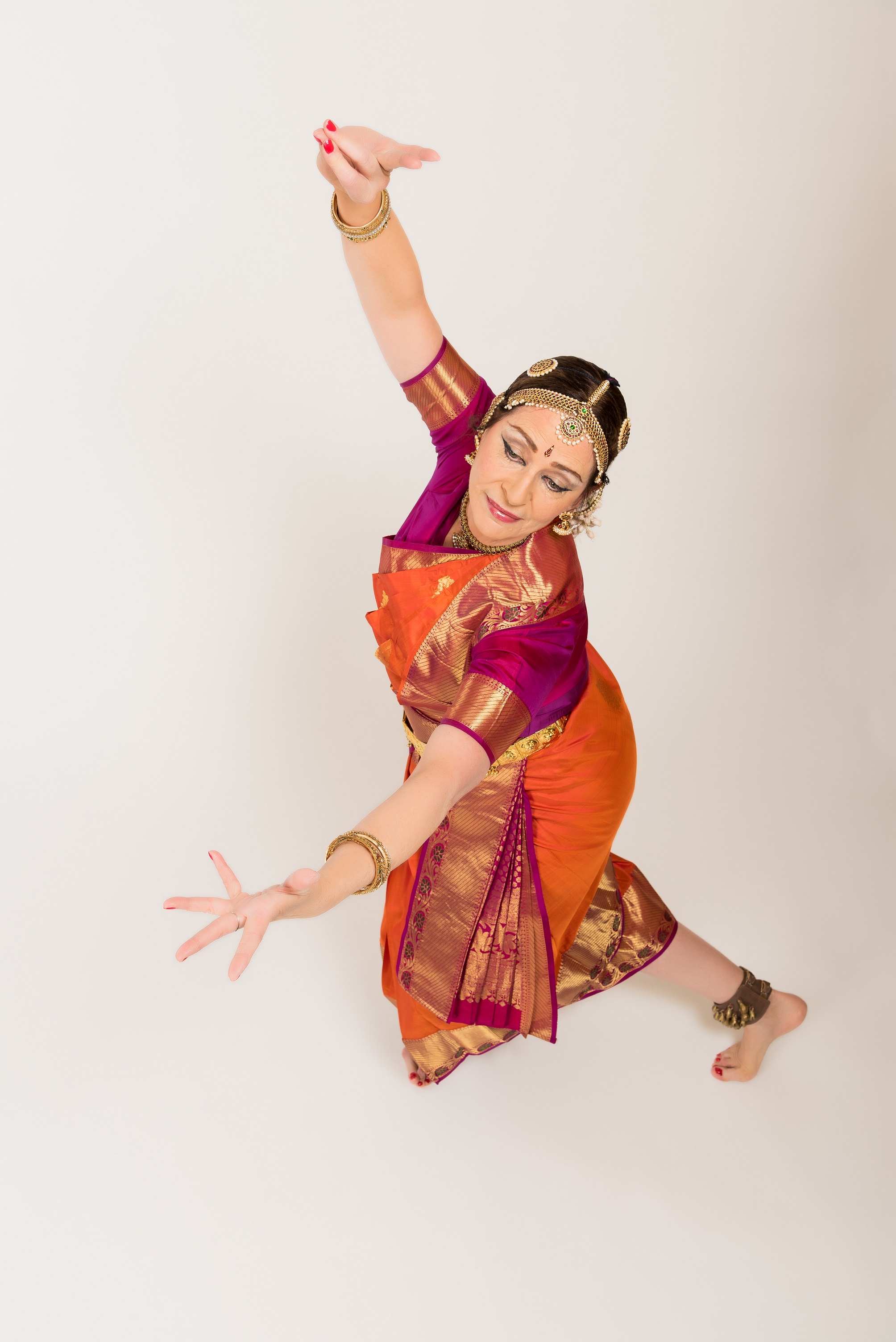 An intermission usually follows the varnams.

5. Padams follow the intermission and are considered the piece de resistance of this style. They are love songs in slow tempo sung to a highly ornamentedand expressive melody. The text is interpreted on many levels; one text, for example, might be treated as the relationship of a lover and beloved, or as thedevotee and deity. The ragas are called rakti ragas that are rich in emotional expression.

It is here in padam interpretation that the dancer relies heavily on raga bhava, her ability to sense the underlying mood of the raga. The luxuriant movement of the melodic ornamentation has a direct influence upon the movement of gestures and entire body. A padam is interpreted solely through drama, and the rhythm, though often slow, is the subtle foundation for every movement that the dancer makes. The musical form is tripartite: pallavi, anupallavi, and caranam.

6. Javali, is a song with a lighter, more sophisticated theme and quicker tempo. The text usually treats love on a more worldly and playful plane. Once again the words are a vehicle for drama (abhinaya). An accomplished dancer will ordinarily know at least four to five javalis.

7. Tillana, is the concluding item of abstract dance counter-balancing the alarippu, and is performed to a rhythmic composition using sol-fa and drum syllables with a small amount of text A Bharata Natyam dancer usually knows at least four tillanas. 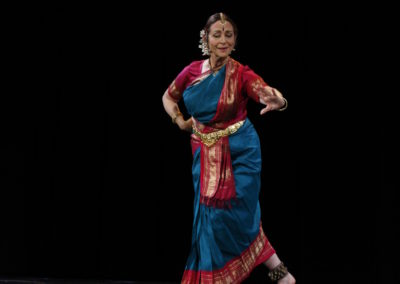 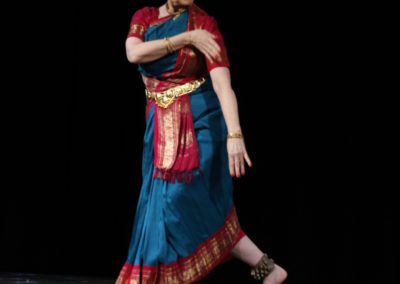 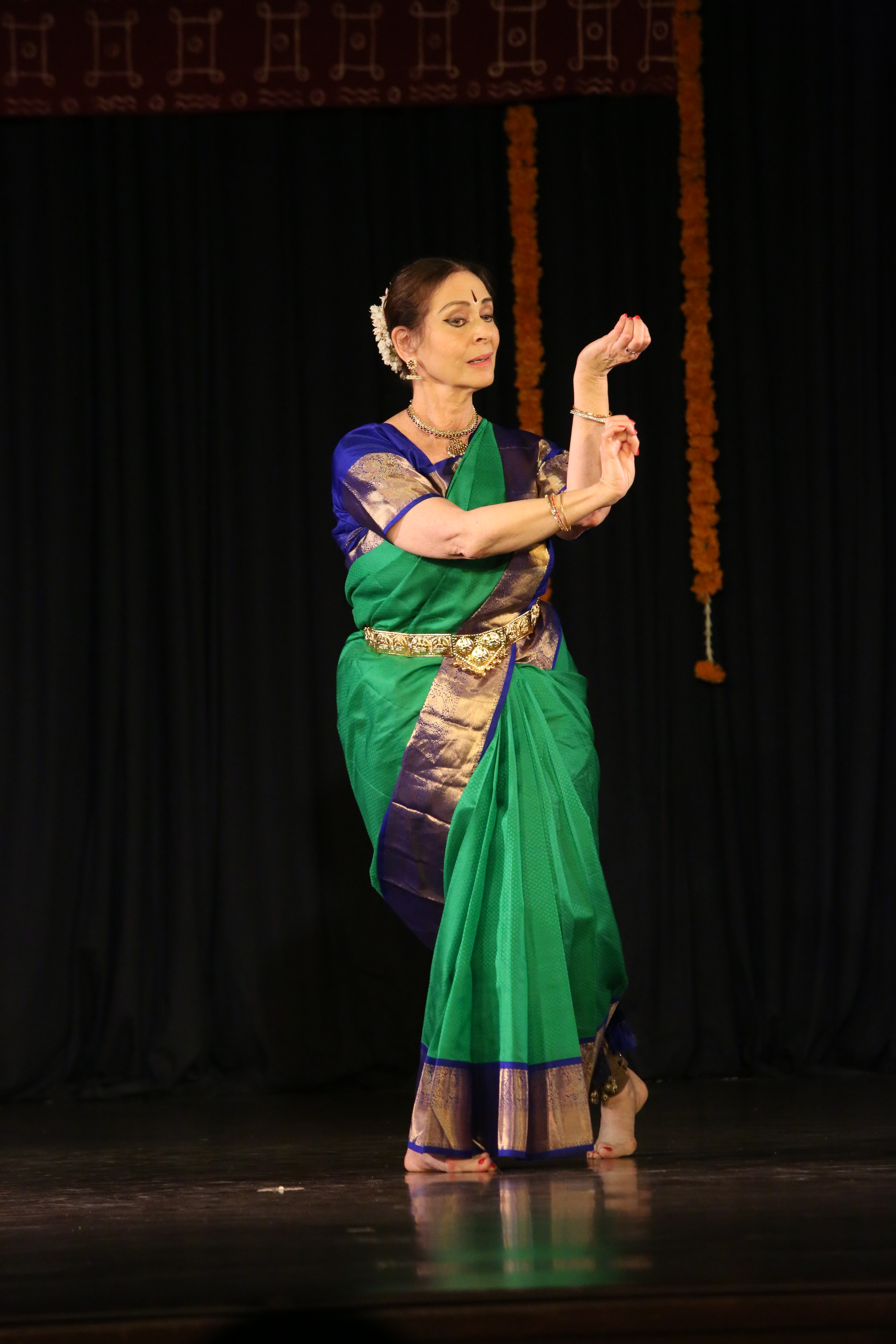