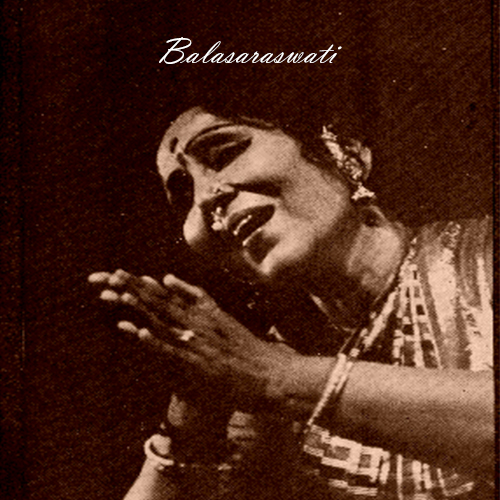 In the history of dance, we find every now and then a supreme artist who dominates the field for a generation, enriching the existing tradition, providing a corrective to current practices and setting standards for generations to follow. Anna Pavlova was one such artist and so was Vaslav Nijnsky. And today in India Balasaraswati is one. The great dancer, the really great dancer, is perhaps an even rarer phenomenon than great musicians or painters or sculptors. This is because the dance is the consummation of all the arts. The dance, in addition to the qualities that pure dancing demands, must be sensitive to and have an uncanny feeling for music. He or she should have an artist’s sensibility o the significant line and a sculptor’s approach to form. He should have a practiced actor’s response to a dramatic situation. Rarely does one come across all these attributes in one and the same person. But when one does, and Balasaraswati has a generous measure of all these, the result is greatness.

The flowering of Balasaraswati’s genius has taken place in a garden of great splendor. For generations, the family has been a repository of the Karnatic tradition in its pristine glory. The family tree can be traced back to over two hundred years. Every branch is dotted with music and dance. Balasaraswati’s great-great-great-great grandmother; Papammal, was a musician and a dancer at the Tanjore Court that was in the eighteenth century. Papammal’s daughter, Rukmin· was also a court musician at Tanjore. By the time we come to Rukmini’s daughter, Kamakshi (circa 1810-1890), the picture is clearer and more details are available. She had been taught by the great Ganapati Sastri and danced at the Tanjore Court till the age of seventy-five. Of Kamakshiammal’s children, two were famous. One was her son Apparkkannu who took to the violin, at that time a newcomer to the Indian musical scene and attained considerable mastery over it; the other was her daughter Sundarammal (circa 1820-1888). Both were pupils of Subbaraya Sastri, and himself a composer of great qualities who has perhaps not had the recognition due to hirr. It is on record that Subbaraya Sastri taught the well-known kriti, Nannu brochutakau in Todi to Ponnuswamy and Sundarammal. While learning the kriti they sang the phrase Mayamma Kamakshi ith such inspiration and feeling that Sastri said that the Goddess Kamakshi certainly belonged to them. The family and their descendants today are thus a repository of the compositions of Syama Sastri and Subbaraya Sastri and the most authentic interpreters of their works. It is also to the credit of Ponnuswamy that he persuaded his niece and Sundarammal’s daughter, Veena Dhanam (1867-1939), to take up the Veena. No finer or more sensitive exponent of the instrument is known in the history of Karna tic music. The Veena was her natural vehicle of expression (though she was also a vocalist of the highest quality), and her music was the quintessence of the Karnatic tradition.

Veena Dhanam and her sister Rupavati both practiced dancing for some time; so did Balasaraswati’s mother Jayamma and almost every other member of the family. Music and the dance reigned supreme in the household. The family was an inspiration for composers and teachers alike. First, there was the association of Subbaraya Sastri. Then there was Sattanur Panchanadier, a pupil of Muthuswami Dikshitar, who taught music to Veena Dhanam and Rupavati. Patnam Subramania Iyer taught Dhanam’s daughter. A great many of the javalis of Dharmapuri Subbarayar were composed in that home. It w s into such a treasure-house of the Karnatic tradition that Balasaraswati was born on the 13th of May, 1918. Music and dancing were in her blood. And music and dancing were all around her. And they were, of course, music and dancing of the highest quality and practiced and heard in abundant measure. Her formal training started at the age of four under the late Kandappan. 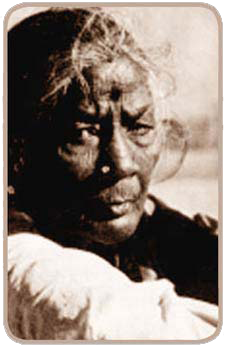 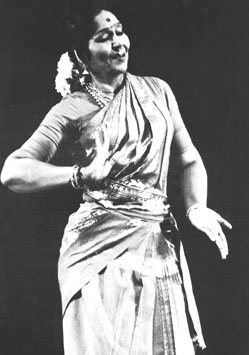 Kandappan himself was the inheritor of a great tradition. For over six generations, the family was nattuvanars, dance teachers. Kandappan’s great-great-great grandfather Gangamuthu must have been a contemporary of Papammal. Two generations later we come to the celebrated Tanjore quartet-Chinnayya, Ponniah, Sivanaandam, and Vadivelu- all of the teachers and composers of the highest standards. Kandappan was the great-grandson of Chinnayya, the eldest of the quartet. Kandapans father, Nellayappan (1854-1906) was perhaps the finest teacher of his time. Kandappan born in 1899, died prematurely in 1941 at the age of 42. The tragedy of his early death is alleviated only by the fact that he trained with a devotion rare even in those days of dedicated teachers the greatest Bharata Natyam dancer of our age.

[Kandappa’s son, Ganeshan Pillai, was trained in music and dance in Jayammal’s house. He became Balasaraswati’s nattuvanar at an early age. Unfortunately, he died in 1987, but he too left an impressive legacy of teaching, music, and dance compositions. Dancers who have studied with him; Nandini’s Ramani( Daughter of the distinguished Sanskrit scholar Dr. V. Raghaven), many of Nandini’s students, her sister Premavada, the well known Dutch Sanskrit scholar Saskia Kersenboom Von Duran, Sushama (Nandini’s daughter), and Kay Poursine continue to perform and teach his compositions.] 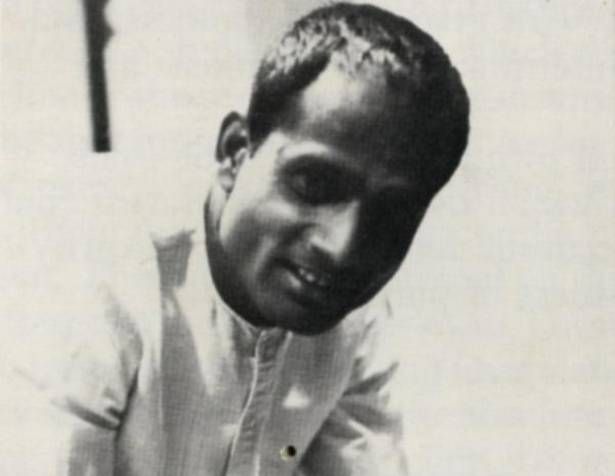 Balasaraswati’s Arangetram took place in her seventh year at Kancheepuram at the Amanakshi Amman temple. The great Nayana Pillai was present at the Arangetram. Word had gone round in Kancheepuram that the great Dhanam’s grand-daughter was to dance at the temple and there was an enormous crowd. But the seven-year-old child betrayed no signs of nervousness and astonished those present with the exactitude of her rhythm and the precision of her movements. “Tremendous” was the word with which the excited Nayana Pillai summed up the evening.

Soon she was in great demand for public performances. But life was by no means a bed of roses. Those were the days of Devadasi Bill. While veteran musicians and connoisseurs went into ecstasies over her art, there were others who scoffed at the practice of Bharata Natyam as a profession.  But Jayammal, her mother, stood firm. The result was not only a personal triumph for Balasaraswati, but the preservation and the strengthening of a great and ancient tradition.

No dancer captured the public imagination as Balasaraswati did in the thirties and forties. Bharata Natyam to the public until then was an esoteric art practiced for the pleasure of a few connoisseurs and dilettantes. Outside the pale of the temple and court, there were hardly any public performances. Balasaraswati made the public aware of Bharata Natyam, not by deliberate efforts as a reformer, but by the beauty and the eloquence of her dancing. It was left to others to fight prejudices and stupidity, do research, delve into the past, give the dancer’s profession respectability and so on. 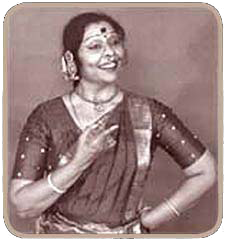 Lakshmi Knight, the only daughter of T. Balasaraswati, died December 23, 2001 in her mother’s house in Kilpauk, Chennai. When I last saw Lakshmi, she was in a St. Francis Hospital cancer ward bed, Hartford, Connecticut. She told me she was determined to get on a flight to Chennai. It seemed possible to her at the time, that if she could get to her beloved mother’s house, maybe, just maybe, she would feel better and perhaps miraculously begin to heal. Muni, her long close friend, and assistant stood at her bedside and looked at me in despair. I reminded Lakshmi that if she left Muni behind in the U.S he could not make his famous decoction coffee for her every morning. Lakshmi smiled and we teased him in the way I always loved. His coffee and cooking are superb. As I left Lakshmi’s that day, I blew her an abhinaya kiss. She smiled a beautiful broad smile. Then her face reflected something astonishing. Perhaps I was seeing her knowledge and wonder at the mystery of what was ahead of her.

My first visit to India was a surprise. In 1976 Bala and Lakshmi sent a formal written invitation to both Kamala Cesar Buckner and me to study in what was then called Madras for 6 months. Kamala is presently the creator and director of Lotus Fine Arts in Manhattan. Both Kamala and I have previously taken classes in Bala’s summer residencies in 1973, 1974, and 1975 in California and Washington. I think this invitation was a leap of faith for Bala, especially when it was known that she was not inclined to teach westerners in India. The prospect of going to India did not hold the big fascination for me that it did for many westerners. India scared me. Kamala and I flew to Madras, then experienced all the incredible ‘firsts’ that move westerners encounter on their first visit to India; intoxicating aromas of jasmine, sambar, idlis, roasting arabica coffee beans, temple camphor mingling with the strong pungent odor of the Kaveri river. I got sick several times. Bala worried and Lakshmi gave moral encouragement. Studying dance in India was harder than I imagined. 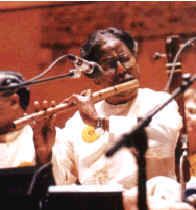 T. Viswanathan, brother of T. Balasaraswati and T. Ranganathan and uncle of Lakshmi Knight, died September 10, 2002. His death is a monumental loss for the music world. He was the epitome of the great Vina Dhanammal family music tradition. When he played his flute or sang everyone heard a rare musical expression at one with nature.

Three days before he died, I accompanied Viswa to the Sri Satyanarayana Temple’s dance drama fundraiser in Hartford, Connecticut where he gave his blessing at the beginning of the performance. During our return trip to Middletown, he told stories of performances with Bala, his mother Jayammal, the great mrdangist T. Kuppuswami, and Ranga his brother, with the young Lakshmi sitting on the side devotedly assisting the family group. Recalling the evening Bala performed for the Maharaja and Maharini of Tranvancore, Viswa described the royal puja room where Bala danced. The program consisted exclusively of Maharaja Sri Swati Tirunal’s compositions. “The performance blew everyone’s minds. So many stories to tell, Kay, so many stories.” I sat in the back seat wondering if I would ever hear them all.

In addition to her teaching experience, Kay has contributed to scholarly performing arts journals, including “T. Balasaraswati’s style of Abhinaya,” The Madras Music Academy Journal, “Hasta as Discourse on Dance,” The Dance Research Journal, and  “Balasaraswati in the US”, Nartanam, Vol IX, No. 4, November 2009. Sangeet Natak Akademi special edition on Balasaraswati 2019, my article “Balasaraswati did not Teach in Vain”.