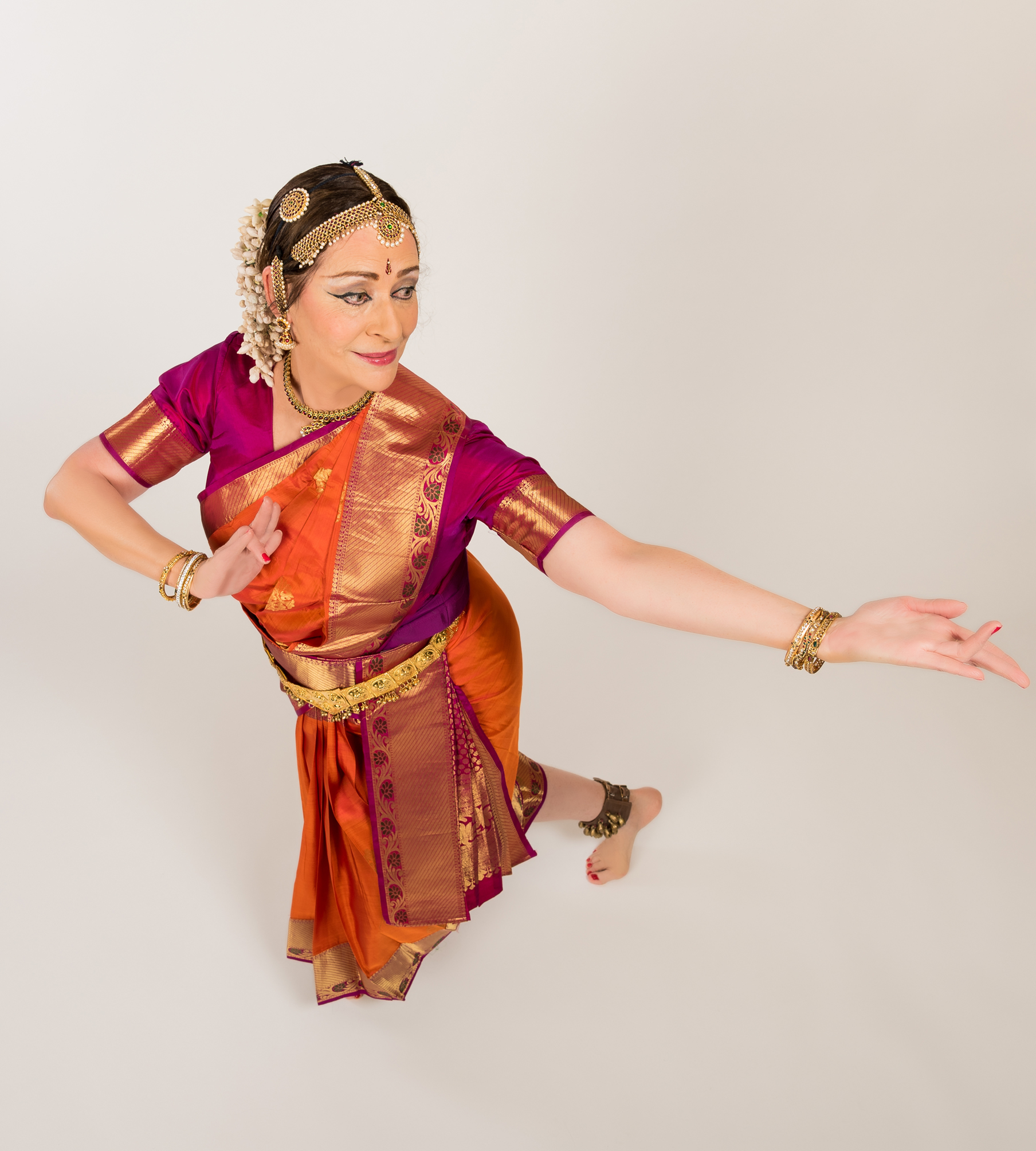 A Brief History of Classical Dance from South India.

The following is excerpted from Jon Borthwick Higgins’ Ph.D. thesis THE MUSIC OF BHARATA NATYAM VOLUME I, 1973, 3-9 pp.

Various successive south Indian dynasties, from the Pallavas and Cholas (6th to 9th, and 10th to 14th centuries) to the Andhra kings of Andhra and Tamilnad, and the Maratha rulers of Tanjore (who reigned into the 19th century), contributed some measure of patronage to this dance art And another line of dance history in the courts can be traced from “Kashmir to Malwa and Sourashtra and then to Karnataka, Andhra and Tamilnad.” (Raghavan, 1958).

In temple the ninth arts. The and class tenth of centuries, musicians a South India witnessed a sudden spurt of temple building which brought with it a comparable increase of interest in the temple arts. The class of musicians and dancers known as devadasis (“servants of god”) enjoyed high status and prosperity at this time and were encouraged in their art (Dasi-attam). “There is hardly a Chola temple and Chola inscription which does not refer to the temple dancers, some of the more distinguished among them even being mentioned by name.” (Raghavan). A Tanjore inscription to four hundred devadasis who were attached to the Great Temple, received free living quarters on four commissioned neighboring in 1004 streets, AD. By and they were Cho la allowed king Rajaraja tax-free land out of the temple endowment (de Zoete).

The next well-documented period of dance history is far more recent In the first half of the 19th century the dance tradition was revitalized and defined anew through the contributions of four talented brothers (known today as the Tanjore Quartet): Chinniah, Sivanandam, Ponniah, and Vadivelu. chapters]. coordinating Each their adavu diverse (basic talents, unit of the motion) four was managed taught to in organizing all the basic dance movements of pure dance into a progressive series of lessons By [adavu upon the rhythmic contour of a musical composition. (Krishnystematic order and then combined with others to produce choreographed sequences based a Krishnamoorthy Pillai) In addition, the brothers composed new music specifically for the dance and introduced a different sequence of items which integrated the various aspects of dance and music into a carefully coordinated, aesthetically sound progression. This infusion of creative energy marks the early 19th century as one of the most innovative periods in the history of Indian dance.

Barely fifty years later, however, an unfortunate combination of social and historical circumstances threatened to extinguish the very life of the tradition. During the millennium which had elapsed since the Chola Dynasty the artistic reputation of the temple dancers (devadasis) had gradually become associate, with their skills as courtesans. More and more frequently the exalted and respected dance became enlisted into the service of professional secular pursuits, “an amusement, entertainment at its best, and an instrument of indiscipline, temptation and vice at its worst” (Vatsyayan, 1968)

Throughout the 19th century, the clash between Indian social practices and Western reforms under the British produced some interesting (and some tragic) results. Indian families of wealth and status were encouraged by their British counterparts to allow young women the opportunity of a liberal education. Yet “one of the great objections urged against the education of respectable Indian girls was that they might be mistaken for dancing girls, who alone of their sex could read, write, sing and play a musical instrument” (de Zoete)

Many devadasis may have been bright and able artists, but by the end of the 19th century, they were no longer respected members of the Indian social community. It took the combined zeal of Christian missionaries and morality-conscious Hindus to finally tip the balance against devadasis. It must be admitted that many prostitutes on the fringe of the devadasis community had taken up “nautch-dancing”, an impoverished and conspicuously sexual version of the classical dance, to attract business. And the reform-minded zealots who led the anti-nautch campaign were hardly disposed to make fine distinctions between one form of the accursed dance, and another. “It was beyond the conception of the Victorian Christian to imagine that faith could be expressed through so immodest and voluptuous a medium as the ‘nautch dance’.”(Singha)

Few realized that the authentic lineage of classical dance, while temporarily shamed and driven underground during this unseemly commotion, was being preserved among certain artistically distinguished families. Several of the great teachers (nattuvanars), some quite old, who carried the knowledge and substance of the art in their heads, “lived neglected lives in remote villages.” (Singha) This was a difficult time for such people and was it not for the courageous and persistent efforts of a handful of supporters, the art might well have been totally suppressed.

Three artists stand out in sharp relief for their efforts in restoring the classical dance to its traditional place of honor in India. UDAY SHANKAR’S great contribution to Indian dance was his international experience and perspective, coupled with a vigorously independent style. Another well known Indian dance personality to come under the influence of internationalism was RUKMINI DEVI, founder of the Kalashetra International Arts Center in Tiruvanmiyur, Madras. Showing an early and stubborn sense of cultural independence she espoused Theosophy and married Dr. George Arundale, while still the young daughter of a highly respected Brahmin family in Tanjore. But it was her scandalous decision to take up classical dance (and her intellectually disciplined dedication to the art) which focused public attention on the possibility that the dance might contain something of interest and value in the lives of ‘respectable’ people. As an accomplished dancer and well-traveled lecturer, Rukmini Devi has made dramatic contributions to the revival of Indian classical dance and continues to supply the profession with numerous dancers and musicians who receive their training at Kalakshetra.

At the height of the anti-nautch crusade in 1925, a young dancer of seven named BALASARASWATI was presented for the first time at the Ammanakshi Amman temple in Kanchipuram. The several leading exponents of music and dance who were present that evening are said to have been deeply moved by the technical assurance and natural expressive range exhibited in this child’s performance. In the years that followed, Balasaraswati lived a regimen of dance and music, lessons and practice, which left her virtually no time for play or leisure but helped shape her into the greatest classical dancer of her time.

The long political campaign for Indian independence, and its final realization in 1947, inspired great interest among Indians in the cultural history of their country. Literature, the plastic arts, music–but above all, classical dancing–were enshrined as the living embodiment of a thriving cultural heritage which could be traced back over two thousand years of continuous development Along with all this recognition came a need to endow the classical dance of Tamilnad and Andhra with a suitable name. Several names had been used in the past popular terms such as sadir and dasi-attam were proposed, as well as the literary terms adal and kuttu, and the names which had enjoyed some currency in music and dance circles, cinna melam and Bharatam; nautch was the only term everyone seemed to agree upon–negatively. Eventually, the term Bharata Natyam (the dance of Bharata) took hold, and the solo tradition of South Indian classical dance is currently known by this name.

”The new name .. .invested (the dance) with the requisite status which was needed in the circumstances of its revival and served to underline its classical moorings. The name at once established the form in a historical continuity which went up to Mohenjo-daro and the Rgveda. An understanding of the art in such a space-time has its own value for appreciation, criticism, and improvement of the art.” (Raghavan, 1958)